Exploring how to control the mind and body (Part 2)

Up to now, we have been talking with Dr. Kashino about his work on elucidating the processes of 'implicit brain functions' that a person is unaware of. Dr. Kashino's hobby is baseball, and through researching and practicing baseball, he has uncovered and clarified research themes, with the aim of improving his own skill.

—Why did you think of doing research connecting sports and implicit brain functions?

Kashino: Originally, over about the past ten years, we have been doing a series of research studies focusing on ‘implicit brain functions’ as a key word or concept. However, we did not take sports as our research theme at the beginning. We are focusing on the processes of implicit brain functions that we are unaware of when we see or listen to things, or move our bodies in our everyday activities. In these situations, implicit brain functions that we are not aware of play a very important role, and we have been focusing on clarifying the mechanism of how these functions work. In addition, from recent progress made in brain science, we have come to learn that implicit brain functions have an extremely important role to play in human decision-making and communication. Suppose that when I decide to buy something, I feel that I like A better than B. So, I decide to buy A, and I am happy with my choice; however, there are very few decisions whose cause I am clearly aware of, and it often happens that what I think is the cause of my decision is not really the true cause at all. Actually, such emotions and decision-making are controlled by implicit brain functions, and the consciousness a person has in thinking ‘I want to buy it’ or ‘I’m happy with this’ is nothing more than a retroactive interpretation of the person’s experience.

—So, human behavior is much more a matter of unconscious or unaware action than it is of conscious action…?

*1 Autonomic nervous system
The system of nerves that, in response to stimuli and information, largely acts unconsciously and regulates body functions such as the blood circulation, digestion, breathing, temperature, endocrine functions, and metabolism. It consists of two nervous systems, the sympathetic and the parasympathetic.

*2 The endocrine system
It consists of organs such as glands that secrete hormones. An endocrine organ is an organ that secretes hormones, and several endocrine organs make up a network and work together. Hormones are chemical messengers that are synthesized and secreted in the body. They circulate through the body's fluid such as blood, and have specific effects on other cells. 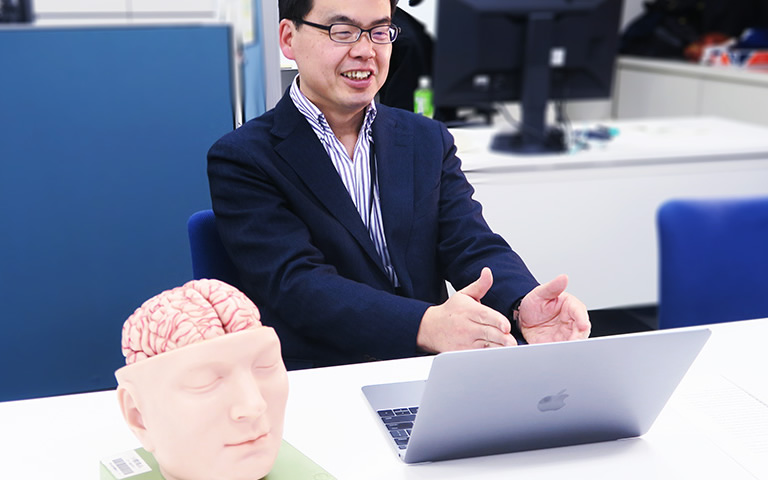 —In this research, one of the sports you study is baseball. What was the reason for that?

Kashino: The reason I chose baseball as a subject for this research was that baseball is well-suited to the difficulties we have in doing this research. Baseball is different from rugby or soccer where players are in constant motion and continue to play for a long time. We can easily measure activities in baseball because there are definite starts and stops in the game-- the pitcher starts moving from a fixed state and play starts, so this makes actions in the game easy to measure and analyze. We are also taking other sports such as golf, cycling, and walking, as objects of our research. However, we think the findings obtained in this research can be generalized beyond the boundaries of specific sports, and they can be applied to activities which involve various movements of the body such as dance, rehabilitation, and even musical performances. But the real reason we chose baseball was that I like baseball (laughs.)

—And you yourself play baseball!

Kashino: Yes. When I was young I did not participate in any baseball club activities, but when I entered my late 40s, about six or seven years ago, I began to play catch during my lunch break. I gradually got more and more interested in this, and I began to investigate pitching form with media such as photos and videos. Now, I am taking this project as an opportunity to do research while at the same time enjoying playing on an amateur baseball team called the Tokyo 18s along with Masumi Kuwata, a former Yomiuri Giants player.

Actually, a majority of this project’s team members are big sports fans. One of our members, Tetsuya Ijiri, for example, was the captain of The University of Tokyo team, and he has made some hits against Yuki Saito (who became a pitcher for the pro team Hokkaido Nippon Ham Fighters.) Because the team members like sports, they are enthusiastic about this project, and there are many aspects of this project where feeling and intuition will play a large part. As stated in the saying, ‘Knowledge and practice are inseparable,’ the awareness of problems comes not from empty theorizing done at a desk, but from actual practice. From this practice, we are able to make a loop-- we can confirm what issues we face and then use this know-how to further improve our practice and then again make clear the issues that arise.

Even if we age, are we able to develop how we use our bodies?

From that question, there is one more that comes up. That is, to what extent is a person able to develop their body after age 50? This is a question that relates to a theme behind our research, and it is one that provides great motivation to us. We cannot avoid declining physical functions after we reach 50 years old, but does that also mean we also cannot improve our ability in sports after this age?

From the point of view of keeping medical expenses under control in an aging society, an urgent task is not just having people live longer, but increasing the proportion of the elderly who are mobile and can move their bodies for their health. It is not realistic to think that many people after they grow old can train their muscles hard and develop their bodies. For this very reason, I believe that it has become more important to learn the best way of using our bodies and bringing out our implicit potential. Isn’t that what we will be able to contribute with our research?

—So, you actually started pitching from your late 40s. Do you feel that you have developed and improved?

Kashino: Certainly, there are some parts where I have improved. For many years, I was able as an amateur to throw the ball rather fast, but my control was unstable, and I had many wild pitches. Recently, perhaps because I have been practicing almost every day, my control has become much steadier.

However, when I look at videos of my pitching, I have been really disappointed because what I see in the video and my image of my pitching are so different. My form seems so old-fashioned and retro, like something from the Showa Period forty to fifty years ago (laughs.) When I cock my arm, I bring my arm too far to the backside, and compared with current standard pitching form, I realized my pitching form is not compact enough. The image I have in my brain is that of Darvish*, but … (laughs). One of the major objectives of this research is to reduce such subjective and objective discrepancies as much as possible, to elucidate the differences between top athletes and amateurs, and to provide feedback as to the optimal solutions.

—In the eyes of an amateur, the difference does not seem much, but I was surprised at how fast the ball goes. How fast have you been able to throw the ball?

Kashino: 100km/h is not too difficult, and I can even continue throwing as many as about 100 balls at this speed, but even if I try hard, I can’t get much faster than this speed. It’s rather difficult for me to throw at 110/km.

However, throwing a fast ball is not the purpose, but rather I want to find out what I should do to make my throws easier on my body and make them more accurate. That is precisely the reason why you cannot do hard work unnecessarily at this age, so it is important to learn how to use your body and bring out your potential. For that purpose, I would like to further refine my skills through this research.

* Yu Darvish, a Japanese pitcher in the major leagues in the US. He currently pitches for the Chicago Cubs in the National League. 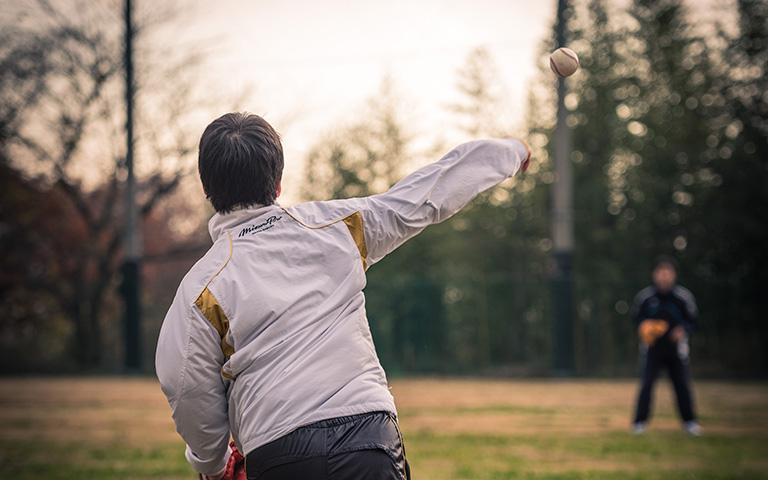 Next: Article 2 (Part 1 of 2)
Understanding the inner mechanisms of the mind and body to find the essence of fine skills and methods for enhancing sports performance
» Back to Articles